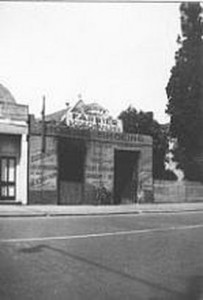 Eliott Engineering is proud to be able to trace its origins as far back as 1904 when Huntly Eliott came to Hawthorn an inner suburb of Melbourne. He set up as the local farrier, coach builder and blacksmith. His family is believed to be from “Stobs” the old parish of Roxburgh, the present day region of “Borders”, Scotland.

After the Second World War, Herbert (Bert) Eliott bought the business and expanded in a variety of directions, including the supply of steel and the manufacture of trailers and truck bodies, as well as various other automotive accessories. This saw the original workshop at 538 Burwood Road grow in size many times.

In 1975, Robert (Bob) Eliott bought the business and set about expanding the range of services offered. This led to the purchasing of more equipment including press brakes and rolling machines. It was not long before larger facilities were built at 691 Burwood Road and the two factories were run in conjunction with each other.

As the range of services grew and the jobs taken on were constantly growing, new facilities were built again at 176 Colchester Road Kilsyth in 1985 and all the equipment was housed under the one roof. It was here with the introduction of various new CNC machines and computer technology that really put Eliott Engineering on the map as a premier fabricator. These facilities have now grown and been extended many times now and also include a purpose built blasting and protective coatings facility.

In 2001, Anthony Eliott a fourth generation to the founder bought the business after working there for many years in varying roles and positions. His vision was to maintain viability and uphold the high standard that had previously become the norm, with the view to expanding and improving the range of services offered yet maintaining quality, reliability and customer satisfaction.

Eliott Engineering is on a never ending quest to grow with its customers, looking for new areas of growth and future potential at all times. Engineering is a tough industry, investment is generally high while margins are very fine. You are only as good as your last job and bad news always travels fast. Eliott Engineering knows this all too well and that is why in nearly 100 years, we have managed to grow and maintain a standard matched by few!

Every day somebody relies on Eliott Engineering, shouldn’t you?